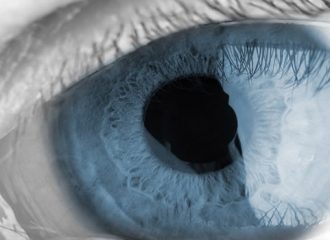 Sulfur mustard (SM) and nitrogen mustard (NM) cause microblistering injury to the cornea at the epithelial-stromal border. When extensive, the epithelial layer sloughs off leading to long term consequences such as recurrent corneal erosions and limbal stem cell deficiency.

Our laboratories have been using a rabbit cornea organ culture to analyze mechanisms underlying vesicant-induced injury to the cornea.  We have discovered that corneal injury after mustard exposure is due to activation of matrix metalloproteinases (MMPs), which degrade the extracellular matrix of the basement membrane zone leading to separation of the epithelial layer from the stroma; this is associated with delayed and defective wound healing.

A major inducer of MMP production is EMMPRIN (CD147), which we found is upregulated in the cornea following vesicant exposure.  EMMPRIN is known to be a receptor for cyclophillin A, an intracellular protein with proinflammatory activity, released from cells following injury.  We hypothesize that injury following mustard exposure is due to cyclophillin A-induced inflammation and MMP activation by EMMPRIN.  Furthermore, slower wound healing of mustard-exposed corneas is due to delayed removal of provisional matrix, as well as delayed deposition of fibronectin.

To test these hypotheses, we will analyze the role of EMMPRIN and cyclophillin in MMP activation in wound healing following mustard exposure.  The effects of inhibiting the action of EMMPRIN using a blocking antibody, and cyclophillin A using cyclosporine A (CsA) will be assessed. Improved healing will be determined by a decrease in epithelial-stromal separation, decreased MMP9 activation and decreased IL-1 expression.  We will also determine if prolonged corneal wound healing after mustard exposure is due to delayed deposition of fibronectin (FN) which is required to support the cells’ migration to close the injury. The ability of a FN peptide known to promote corneal epithelial wound healing by facilitating migration will be analyzed.

Results of these studies provide important mechanistic information on vesicant induced corneal injury and may lead to the development of new therapies for treating mustard injury.

Message from the Director
“This is a massive effort designed to coordinate many different research groups. We will develop drugs that can be used against actual chemicals that could be used in a terror attack.”
— Jeffrey D. Laskin, Ph.D. – Center Director